I have never built this frame up.  I have had it for going on almost four years now.  I've decided I want to build a more commuter friendly bike rather than strictly a road bike, so time to sell this so I can get a frame with disk mounts and fender mounts.

This particular frame was built by SAPA in Portland Oregon before they stopped producing bicycle frames (they also made all the frames for Turner).

The frame is a 52cm and comes with an ENVY 2.0 fork and headset.  As you can see from the photos it has never been assembled.  The bottom bracket is faced and the head-tube is reamed by SAPA.  It's anodized grey.   It's a very light aluminum frame at 1.22Kg

Spooky still makes this bike but it's now fabricated by Frank-the-welder in Vermont.   http://www.spookybikes.com/custom

The forum is chopping some of the images, mainly the first one. Here is the direct link to the image
http://www.fastglass.net/photos/var/albums/For-Sale-Pictures/20140710-forsale-spooky-skeletor-9.jpg?m=1405012506 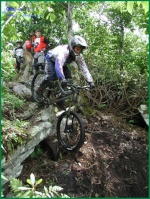 Bump. I have never sold this thing. Entertaining offers... Make one I cannot refuse. I am wanting to buy a Gravel bike pretty bad now.